Administrative cluster PJSC Tatneft is a set of buildings constructed throughout times: a 12-storey office building, a 15-storey tower, several 1 and 2-storey extensions of an entrance group, conference hall and cafeteria. Reconstruction united these buildings into a cluster matching the company’s status, creating an entirely new look. Façade’s design of a 15-storey tower and entrance’s group volume is thoroughly integrated with a façade of a 12-storey office building, which renovation was completed in 2016. 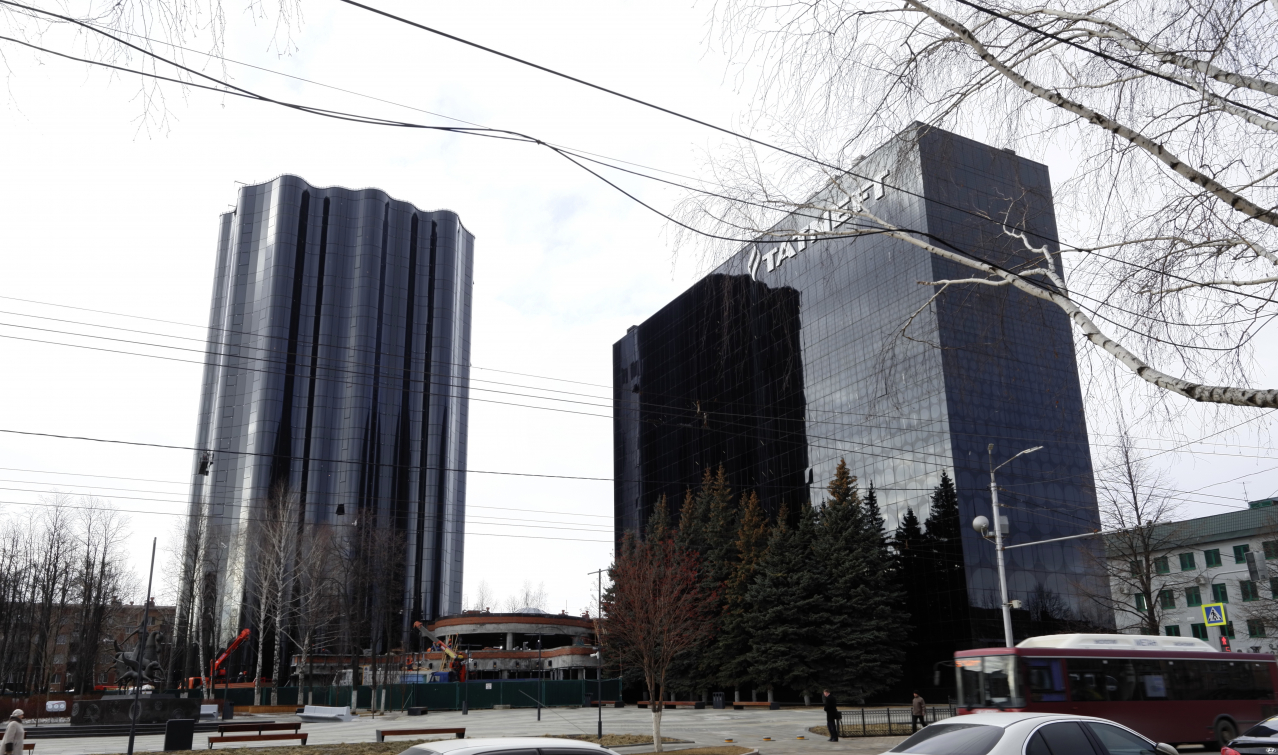 Reconstruction of the office tower

The look of the Tower, made in black reflecting glass, symbolizes flowing oil. A recreated contour of the reconstructed building has a cluster shape, reminding an octagon, with rounded corners, rising to the height of 15 floors with the superstructure. Originally, the building had one underground and 13 ground floors (13th - technical). In addition to a new façade of panoramic glazing, project includes adding 2 new representative floors (14 th and 15 th ) and technical rooms on a rooftop. Solid molded (curved in plan) structural glazing removes excesses and gives graceful laconic outlines to the building. Its strict toned façade as well as analogical existing façade of the main building create a united harmonic look of the office buildings of PJSC Tatneft. As a result the tower becomes a more significant vertical dominant not only of the cluster itself, but of the entire city. Maximum height of the building above the earth reaches 63,5 m.

All the rooms of the building are meant for work of office employees and administration of the company. On the representative floors VIP interiors are supposed to be designed, although functionally a set of rooms is the same as on the regular floors. The reconstruction included not only facades and constructions, but plans design as well. From the 1st to 12th floor there are standard offices for employees (4 types of plans with mixed zoning: open-spaces for regular employees, cabinets for heads of departments, meeting rooms and coffee- points), 13th floor for technical equipment, 14th and 15th – offices for top managers (cabinets of top-managers, conference halls and meeting rooms).

Reconstruction of the entrance group

There was used a quotation method in the look of the entrance group – the main element of the façade facing became structural curved glass, which had been used in the tower reconstruction project. This way we united all the volumes of the business-center into a single building.

The façade of the entrance group has a peculiar contour: its wavy line seems to quote the previous perimeter. In the middle of the façade, where employees’ entrance is located, it divides in two lines horizontally. On the first floor it moves forward, creating space for entrance tambour and security turnstiles. This movement is emphasized by the line of a metal sunshield. On the second floor the contour of the floor moves back in the building creating additional windows to lighten the double-light space of the main hall.

The demolition works of the old building included bearing constructions made of reinforced concrete both vertical and horizontal. A light dome became an extremely important architectural element of both exterior and interior, which absolutely changes the geometry of the space.
A truncated cone with an inclined axis replaced a former construction of a polygonal pyramid.


After reconstruction the building gained not only a new visual look, but a modern planning decision, where all the space is used rationally, and flows of employees and visitors are allocated evenly. 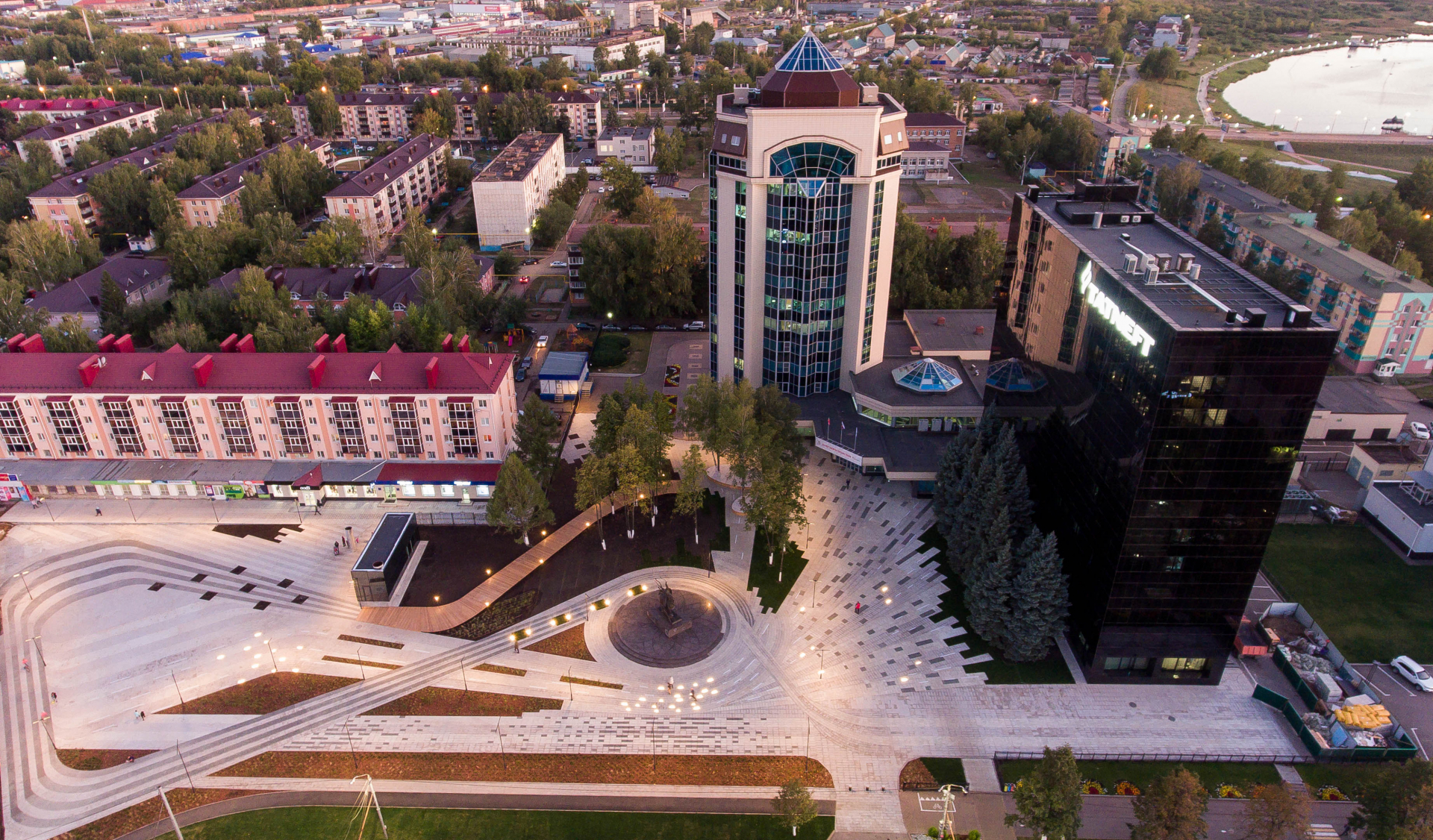 The interior design of the cluster develops the principles, applied in the previous interior projects for the customer PJSC Tatneft (Technological scientific center in Skolkovo, renovation of the Office building), although keeping the identity of the office tower. The main idea is a connection between interior and exterior, minimalism and monochrome colours.

Main characteristics of the interiors of the standard floors of the tower – laconic spaces with a strict geometrical structure, for work and realization of ideas. Interiors are monochrome with an accent colour for each floor, which makes navigation in the building much easier. There are curved LED lightening along the perimeter of the building, creating architectural lightening of the façade, - a quotation of the Office building. Besides, this lightening accentuate plastics of the curved façade, increasing the dynamics of its shape. Flooring of the most spaces is made of vinyl tiles.

Porcelain tile is used in elevator hallways, corridors and lavatories. False ceiling is made of plasterboard or acoustic panels of a big size.

The interiors of representative areas include the entrance group, 14th and 15th floor of the Tower. In these spaces the keystone is openness to innovations and ecological policy of the company. This idea is reflected both in plans’ design and in materials applied. For example, the glazing of the entrance group is made of transparent glass, which unites the inner space of the hall with square in front of the building. Landscape interior – a tree growing on a hill, surrounded by still water of a fountain, lighted by a light dome, - is a quotation of the quarter’s landscape. Interior greenery is a metaphor of company’s high standards of ecological production.


A background for the tree is a decorative wall with a relief 5 meters high. The relief depicts «devon» - a cut of oil-bearing layers of the earth, a metaphor of the main activity of the company. Special attention is paid to the materials used in the representative zones - natural stone, veneer, porcelain stoneware. The color palette also differs from standard floors - monochrome is combined with the natural shades of the materials used. 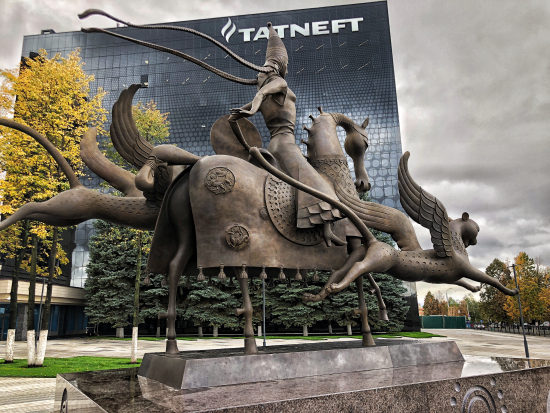 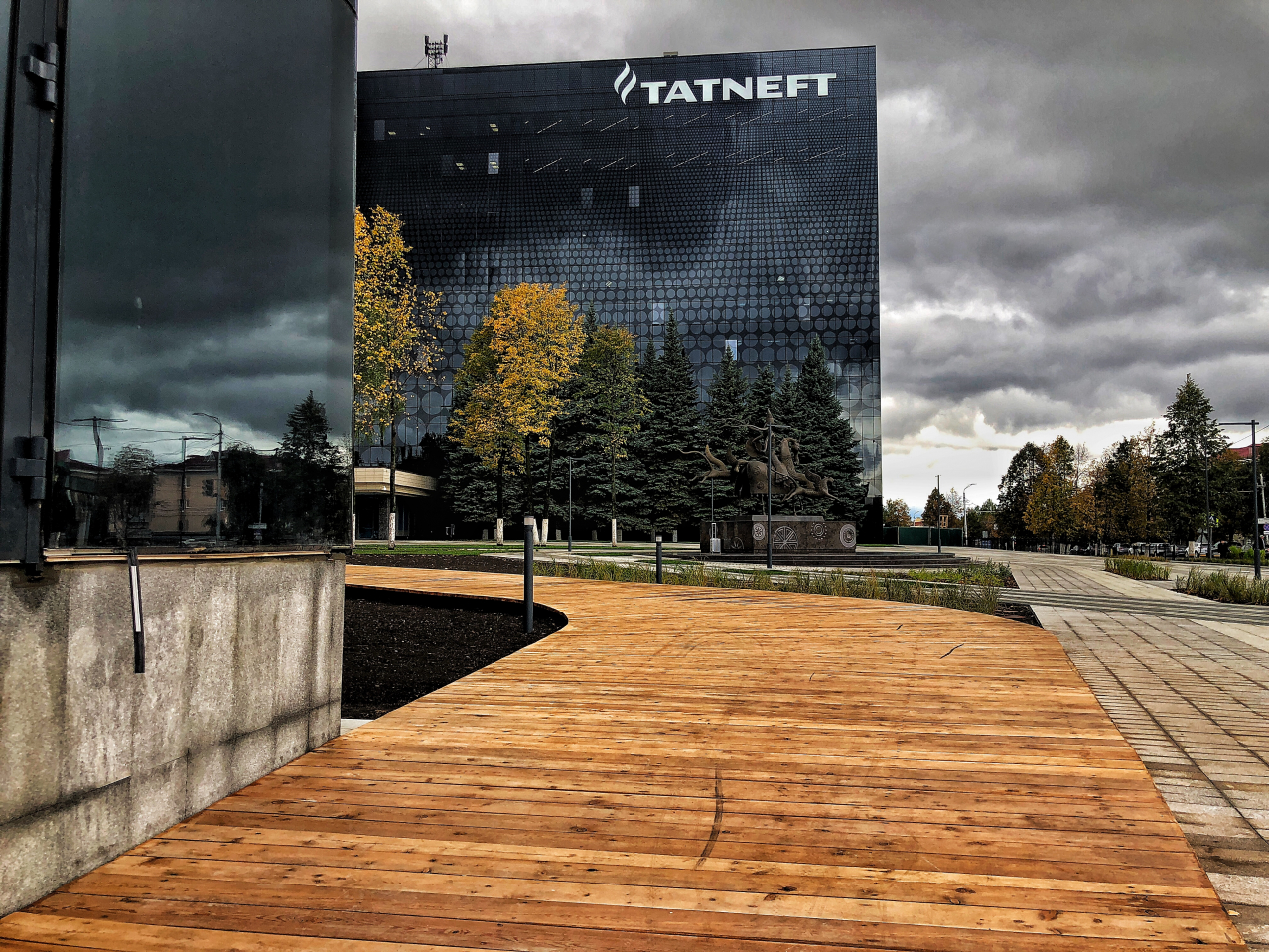 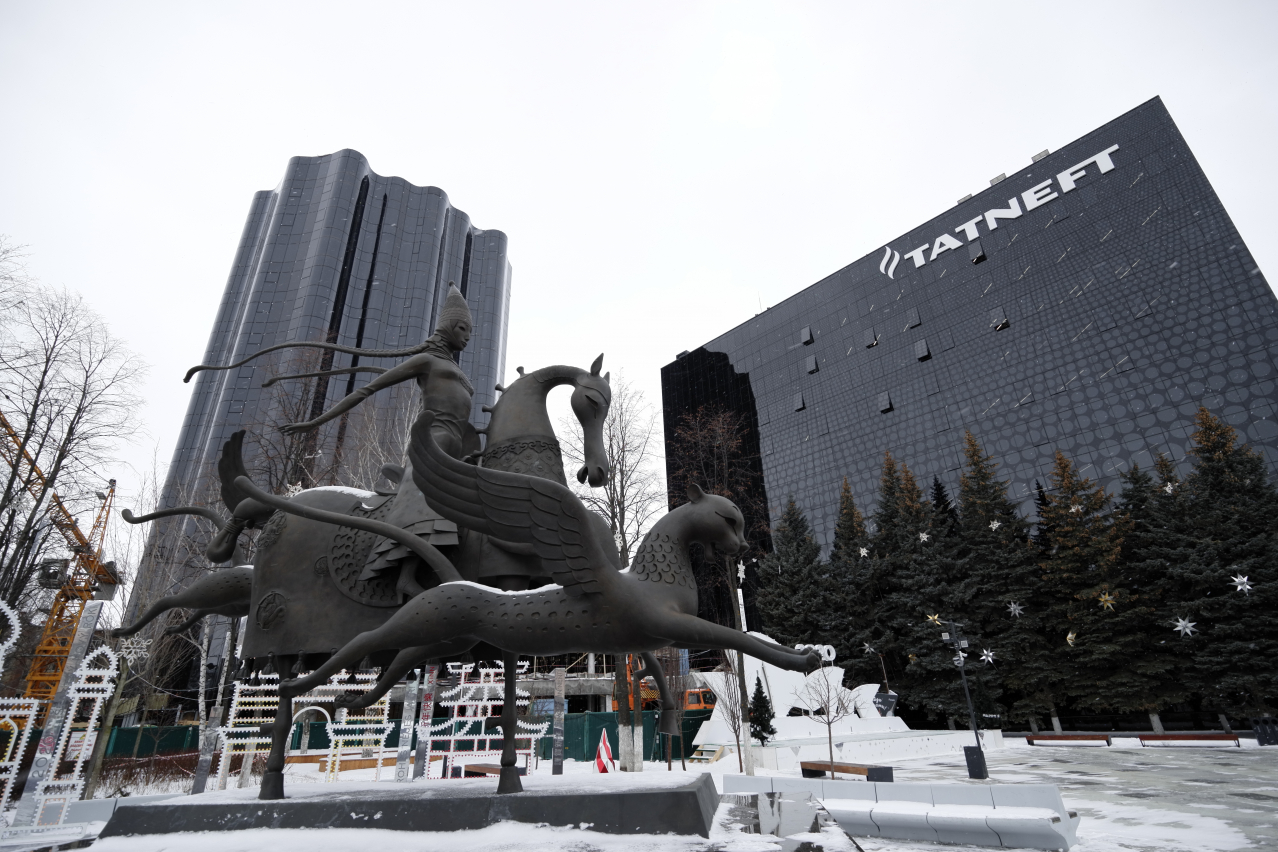 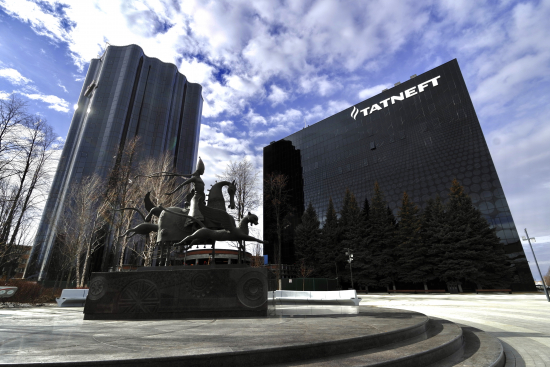 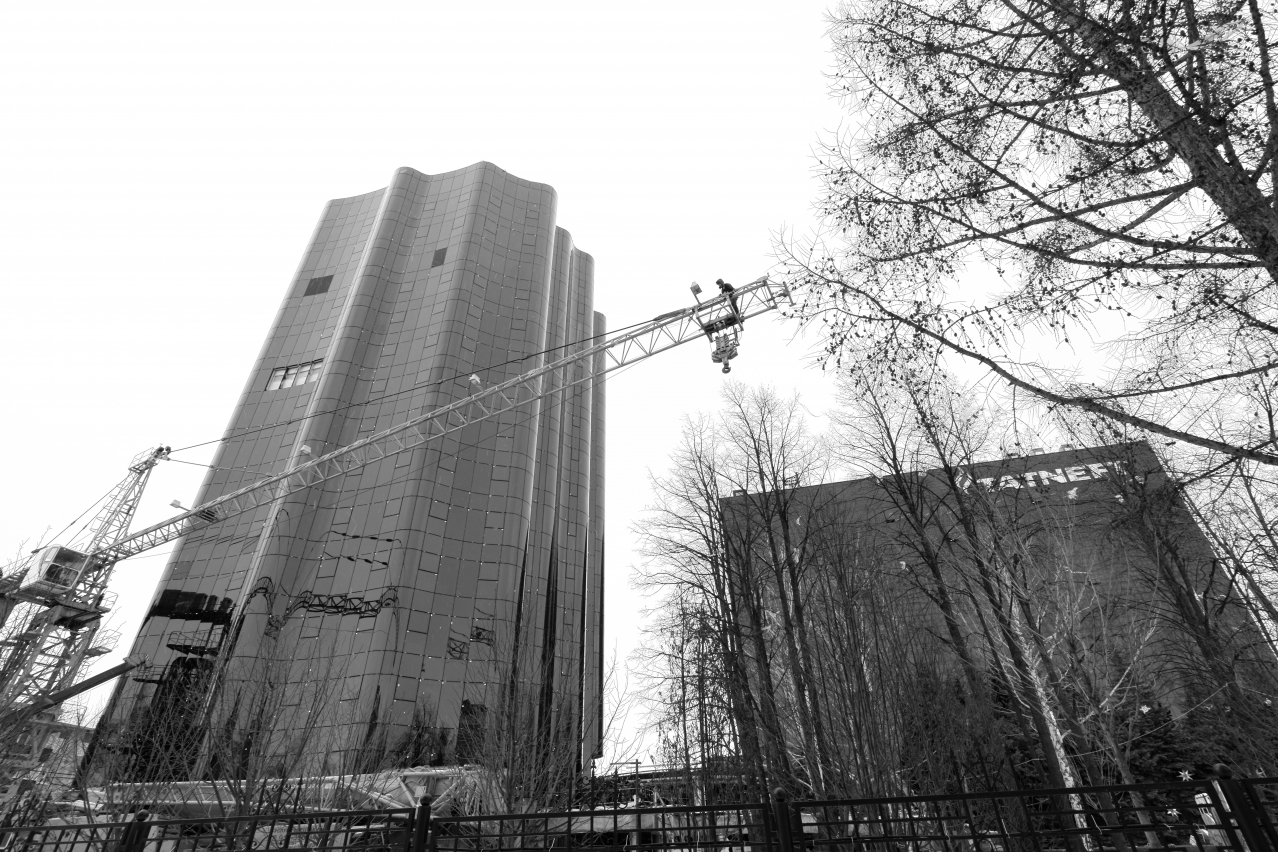 Next project
Prev project
Up